Another Dark Plant and its Siblings 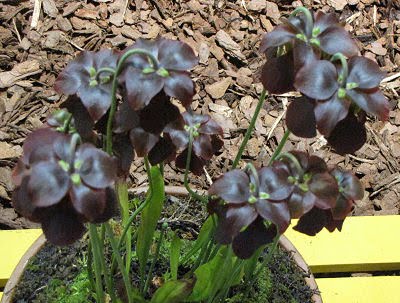 Here' another dark plant from the Philadelphia Flower Show. It's a pitcher plant, Sarracenia x chelsonii, which is a carnivorous plant. These are the flowers, but the leaves are modified into open tubes in which water collects. Insects are attracted into the tubes, which also have downward pointing hairs, so the insects can get in, but not out. This is a hybrid- fooled with on purpose to make an ornamental plant (and this one won a blue ribbon). Want to see what wild pitcher plants look like? OK! 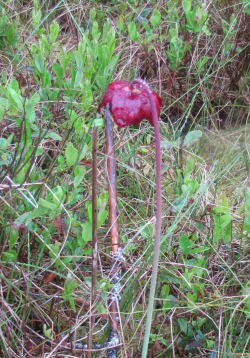 Here is the flower- the same as the dark showy part of the plant above. If you look at the one from the flower show you can see the tubes coming out of the pot. They are green. Here are the tubes from the wild one, which is Sarracenia purpurea. 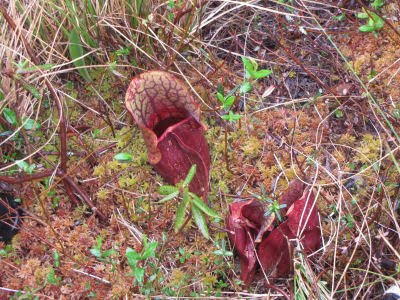 Quite beautiful, don't you think? These wild ones were growing in the Upper Peninsula (Michigan) last year. I give it a blue ribbon, too. I learned something else when we took those pictures too. Look at what that blossom is hiding, when it's turned up. 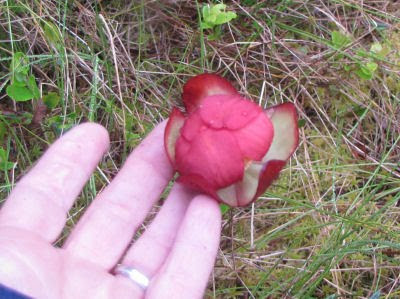 I sure never expected the two-toned effect. 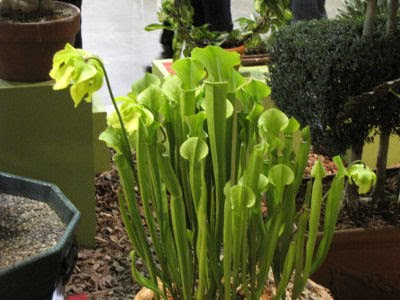 Here's another ornamental variety from the Flower Show. It's called Amber Rays. Later, I found yet another one at the Flower Show, but I don't know what variety it is, but the curly petals were really odd. 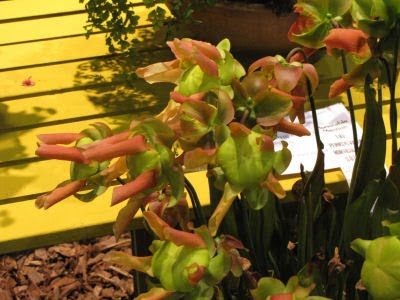 It seems weird to me that a bog plant (an acidic wetland) should become a popular ornamental plant. But that has obviously happened. And they are beautiful. But the wild ones aren't exactly shabby, either!

Wow! some rare exotics here that are fascinating, much like the California pitcher plant. Great shots and info.

all very unique and lovely plants. Are the flowers in that first one black or just a very dark shade of maybe purple?

Have long wanted a plant with black flowers. Cool. I like your presentation of the wild pitcher plant. Very nice.

Oh how I love a good bog plant! Great shots!

Hi Jo- The pitcher plants are so weird. Up until a few years ago hardly anyone had heard of them. Now they are all the buzz.

Ann- no one has yet created a truly black plant. That was one of the "holy grails" of breeding- to create a pure black tulip. Modern genetics have gotten some plants close, but they are all really deep, deep purple.

Vanilla- I think the blackest plant created so far is the "Queen of the Night" tulip. As for black foliage, I think the black mondo grass is the darkest I've ever seen. It's REALLY dark. (not vanilla!)

John- I know! Anyone who 'counts' loves bog plants, right?

That flower show has so many interesting varieties of plants. No wonder you like to go every year. Downloading all the pictures must keep you busy for days after you get home!!

pitcher plants - we see these as seeds and plants in garden centres, oh to find some growing wild.