I see a lot of local roads on my new job. That's OK with me. One of my "hobbies" is to drive around back roads just for the heck of it. I try not to waste gas, but if I'm somewhere and can work my way home by taking a different route, I try to do so. That means that I know a lot more back roads than most people.

But not enough of them! I still have to look up a lot of the addresses I'm visiting. (It's amazing how many of them Google gets wrong.) At any rate, I was taking a back route from one site to another, and thankfully it was dry today, and the snow is off the back roads. I passed a sign that said "Road Narrows," went down a hill and around a curve, and found myself on Baseline Road. 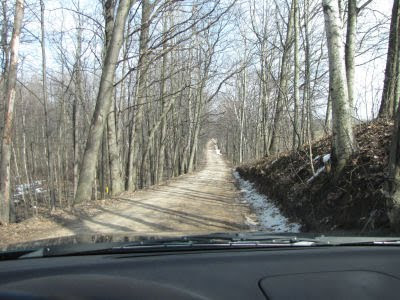 You can probably guess that I like those kinds of signs and these kinds of roads! It makes me want to go back in the summer with my bicycle. But, even so, this was not the best road of the day.

I probably can't show you the nifty house I had to picture... conflict of interest, or confidentiality, or something. But I can show you a picture that I didn't have to turn in for work. You'll have no idea where it is anyway. The "real" road ended at an old farmhouse, painted quite colorfully. As I was doing my survey, I realized that the front of the house was on the opposite side... with only woods in front of it. The owner then showed up, and she pointed out the "old carriage road," as she called it, which did, indeed come right up the edge of a hill to the front of the house. 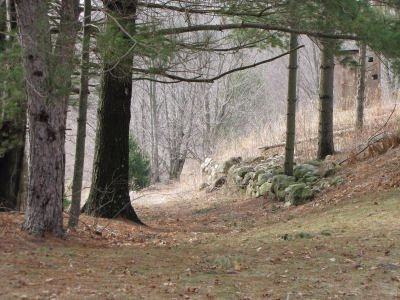 Now, that section of road is abandoned, and the trees have created a shield at the edge of the hill. The house overlooks a field in the valley with just a glimpse of a paved county road in the distance. It was a beautiful spot!

Now we are going to have a couple more days of winter! Ice and snow on the way.

Email ThisBlogThis!Share to TwitterShare to FacebookShare to Pinterest
Labels: travel

I drove out to Palmyra, NY, a few weeks ago. Google maps directed me to a short cut, but when I got there, the "short cut" was a cow trail several miles through a farmer's property! :-p

Nice photo. I live in a rural area with many roads like that.

My kind of roads! Love those shots. I used to find a different route home every Friday after work. The Interstate is boring, but efficient.

i love seeing the backroads sometimes too, sometimes, i get scared when it feels so out of nowhere and meandering very narrow cliffs, i am afraid the car would fall off the cliff and no one will be able to see :(

There are so many back roads around here that I would love to explore, I just never seem to find the time. That looks like a good one that you were on.
We're expecting more of that snow too.

You're the queen of a very serene looking road! Looks so quiet too..