It's Not Technically My Family, but...


... I would still call it family time. Everyone is related except me, and they are all pretty used to me. Yesterday, the rain let up for a while, and some of us took the girls to the playground. 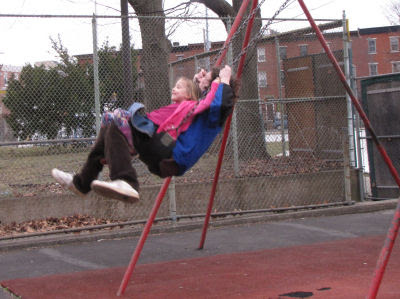 David gave Mia a ride on the swings. She's plenty big enough to pump herself, but it's always more fun with Daddy. 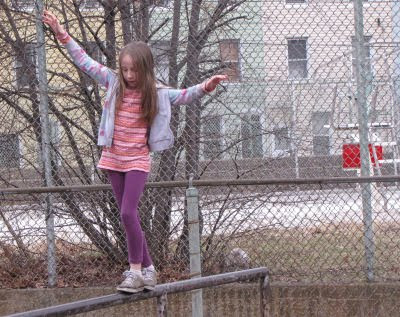 Anja wanted to show off walking the pipe railing. She actually made it across four sections before losing her balance. 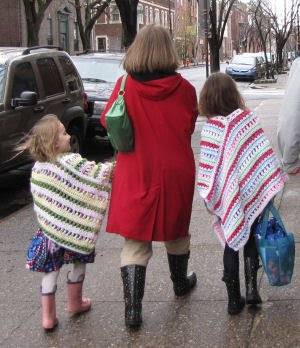 Today it rained all day, but we walked to church anyway. The girls wore their new ponchos (yes, I got the green one done too). They like them. I am happy, and now I'm working on the next project. I'll save that for a future post. 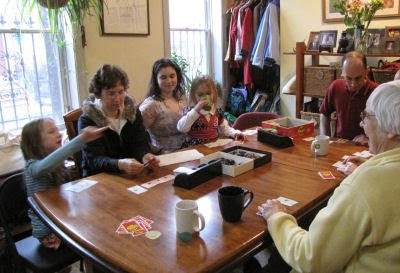 We played a lot of games in the afternoon. The girls can hold their own in a lot of games now, but teamed up with an adult for Apples to Apples. We also called a game called Telephone Pictionary that was a lot more fun, in my opinion, of course. It needs a good sized group, which we definitely had. Each person writes a phrase of something that can be illustrated. The next person has to draw a picture of it. Then the paper is folded so the words don't show, and it's passed to the next person who writes words of what the picture shows. This continues all the way around the table. They they are opened up and read/shown to see how it changed. There were some good laughs over that one. For example "a cat in a teacup" ended up as a "coyote on a magic carpet." It's a great game because everyone gets to do something all the time.

Email ThisBlogThis!Share to TwitterShare to FacebookShare to Pinterest
Labels: friends

Aw, how FUN!! I love to play games with a bunch of people.

What a lovely family. I'll be trying out that game with my family too.

We play game everyday too.

Is life actually a game itself?

wow, those ponchos look great, and it is always heartwarming to see family enjoying games together.

Is Anja a future gymnast or maybe tight rope walker? I would have never made it across one section...lol
That game sounds fun. The girls ponchos look great too

ponchos turned out great!! love them

When did you ever find the time to do those ponchos? They are so nice!

I always enjoy playing games with people. That is one thing I miss about not have a family (well, one with people--we do have our 3 pets who are our family but they don't really play table games very well!)