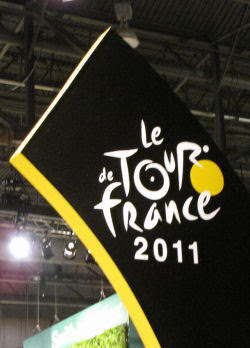 Did you think this was going to be a bicycle race? When you see... you'll know there won't be racing, but it does involve a bike. I think the idea of the display was to have a lot of fun with all things French. So they piled them all on a wagon, and fancied up the bike. Throw on a bunch of colorful flowers, and it's all ready for a ride.

You'll need to have some impressive thighs to move that load! 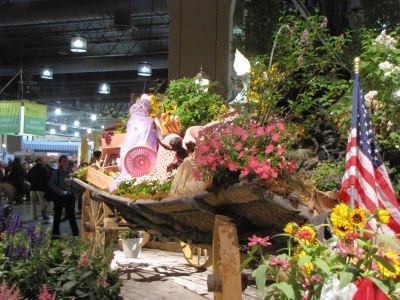 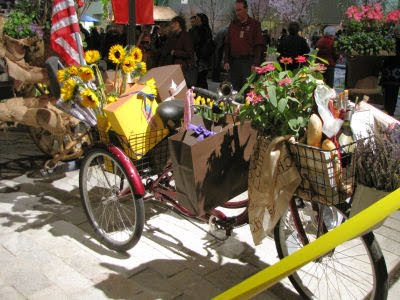 I have to confess that I don't understand why there is an American flag instead of a French one, but... maybe the pedaller made it all the way across the ocean already! Want to see what's on the wagon better? OK. 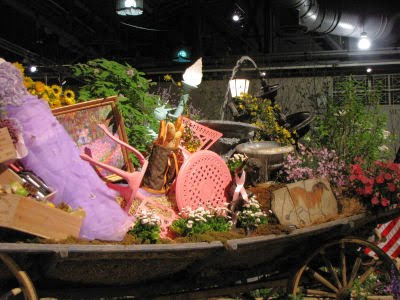 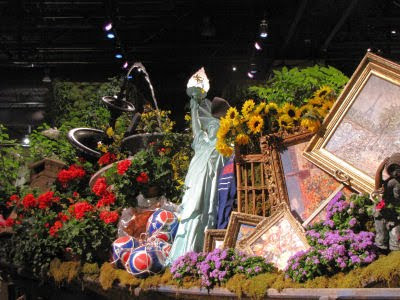 I might take a Flower Show break tomorrow, because there are a couple of nifty local things to share.

You are right Joan, I wouldn't like to pull the wagon - although the Trike looks a lot like my bike when I have been to the market :) What a display, Love It.

what a fun display that is. That wagon is loaded down. I wouldn't want to have to haul that thing home :)

This is gorgeous. I love flower shows and home decor displays. We try to have fresh flowers in our home at last once a month, especially in winter, to remind us of their beauty and scent, which is to remind us of the beauty in the World.

How lovely that French display is. I'm not sure why they didn't do both the French flag and the U.S. flag both are red, white and blue...but it's nice they honored us. It looks like quite a lot of work went into that presentation and it is just gorgeous and very much like what I saw driving through France the several times I visited. I always found the French quite welcoming and friendly - contrary to what I'd been told. I think we get what we give!!

Carol- you must have a wonderful market!

Ann- no kidding, but it was a lot of fun. You could play that memory game with it... remembering as many things as possible in just a few seconds.

Hi Doug- Me too. I'm addicted to at least one flower show a year. When I can pull off the Philly deal it meets my needs and lets me see my friends too.

Carmen- I would really love to go to France. It would be even better if the French were friendly.

We do have a lot of local farmers markets that are always good value - some farmers still have produce for sale with the honesty box, though they are becoming extinct. Sad as I always thought it a good idea.