I've been wanting to try my hand at making paper for years, but haven't gotten around to it yet, really. I made a lame attempt once a long time ago. But someone else does it every year. Do you see the paper in the picture? 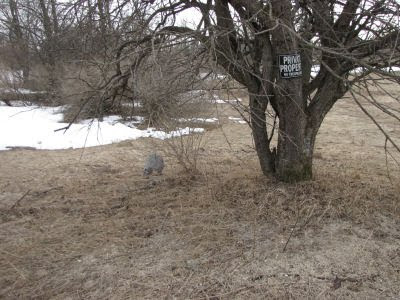 It's that gray mess caught on the bush, under the tree. Not only was someone littering, but as you can see, they were also trespassing. 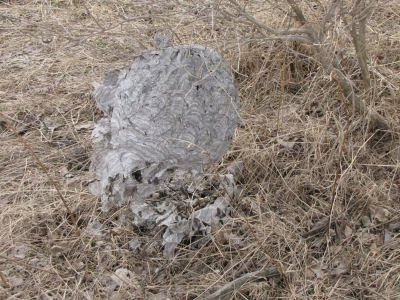 The culprit is the bald-faced hornet. This is a fairly ordinary hornet nest. The thing that is odd is that it's so low to the ground. And it wasn't originally higher up, but fell down during some storm. It's firmly anchored to that honeysuckle shrub. I wasn't in any danger by checking it out. The bald-faced hornets were all gone for the winter, abandoning all their work of the previous year. Only fertilized queens live over the winter, and they burrow underground to survive. Believe me, if it were summer, I wouldn't go anywhere near the nest. These are aggressive insects, and will attack and sting without much provocation.

Technically, they are a wasp, the Dolichovespula maculata, but due to their nasty personalities, they are usually called hornets here in the US.

Each spring the queens emerge, lay their eggs, and feed the larvae. When workers mature, they continue to expand the nest. They add layers of paper made from chewed up wood fiber and saliva. The surface is actually quite beautiful in a natural sort of way. 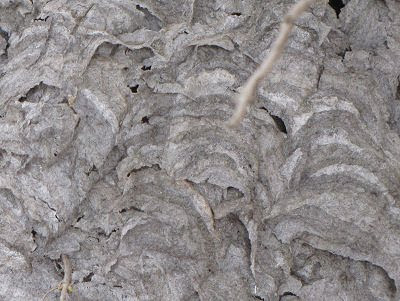 This nest was about a foot across, an average size. I turned it up, hoping to show you the cells inside, but it was too old and "blown out," all the internal structure was gone.

you have got to admire the work that goes into them. The wasps over here make similar nests - they can be quite large.

Those hornets or bees are good architect.

Gives me the heebie-jeebies. I know they are a part of the plan, and they are interesting, but I don't like them!

Yikes ~ Ditto for me ~ Cool infrastructure stuff :)) but I'm afraid of them! Happy Monday!

So does this inspire you to start your paper making project?

that is a pretty big nest. It is a rather odd place for it to be though.
I've also thought about paper making, I keep wanting to try and maybe one of these days I'll actually do it.

EEEK! So it is empty?? I always wondered about those things.

Gotta love those crafty, creative hornets. Well, I respect the hornets … and love their talent! I've been using bits of their paper in some of my recent creations!

We had a paper wasps start nests in our carport when we lived in Connecticut. About two days into the project a bird would come, destroy the nest and devour the wasps. I never did identify the bird that actually did the deed.

That paper is surprisingly tough.

Whoa! You just brought up a memory from my childhood. My Grandmother would burn these nests. It was crazy and you did not want to be anywhere near it. Once one of those mean Hornets flew down the back of my shirt and stung me....while I was running away.

Carol- Some of these can get up to 3 feet

rainfield- that they are, but I can only appreciate their work when they are gone.

Ferd- Yeah, there's something primal about the reaction to that buzzing.

Ollie- welcome! Yes, I try to appreciate only from a distance (when they are there)

vanilla- maybe... I've been thinking about giving it a whirl this summer, but I have several other projects on tap too.

Ann- if you were closer we could try it together.

Lin- all empty in the winter. There should be a comb structure inside, but it's all rotted out.

Rose- I love the shading and shapes.

Chuck- now that is interesting! I wonder what it was.

Jean- how on earth did she get close enough to set the fire? Hornet inside shirt is bad, bad, bad! I feel for you even now.

Hornet made nest out of that? Amazing to see..