Ducks of the Day


I'm not so great at recognizing waterfowl, but I'm trying to improve that. Ellen and I recognized a few yesterday that I'm not even showing you today. We saw mallards, and buffleheads. It's not that they aren't nice ducks, but we are both trying to sort out some of the ones we don't know. Thanks to binoculars and the zoom lens, I can identify some of them now. I'll show the poorest picture first. 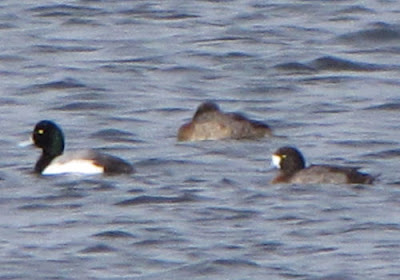 On the left is a male Scaup, the question is... Greater or Lesser. I guessed Lesser, but local bird expert Dave Dister things Greater, so that works for me! So it's Aythya marila. Notice its pointy head. Behind it, the other duck in profile, is the female with that white patch behind her bill. Sorry the pictures are fuzzy, but I had the lens all the way out, including optical zoom, and was just holding the camera by hand. These were on Pere Marquette Lake, the deep lake that connects with Lake Michigan. It's where the carferries dock. 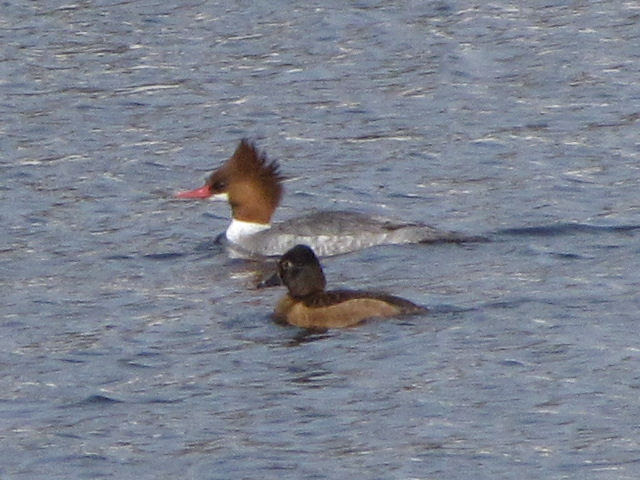 Here's a duck that I saw last spring on Nordhouse Lake. However, the ducks decided to be confusing. They were swimming in "unmatched" pairs. The duck in front is a female ring-necked duck, Aythya Collaris. The duck behind her is a female common merganser, Mergus merganser. Maybe they are enjoying a bit of conversation without the boys around. 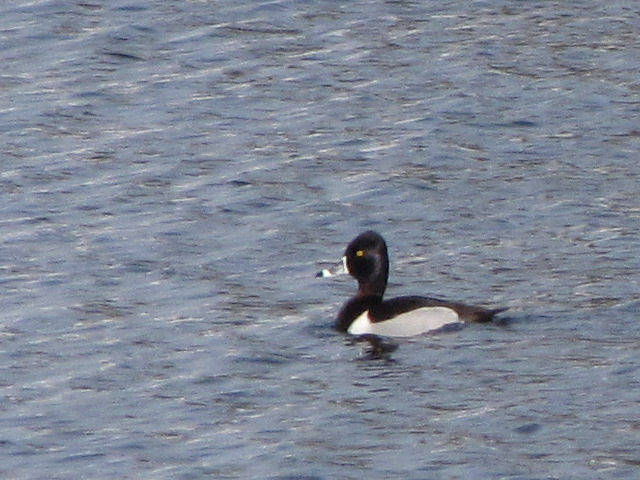 Here is Mr. ring-neck. I know... the ring is around his beak. But the books say that the neck is cinnamon color, but is hard to see in the field. So you just have to do some mental gymnastics with the name. 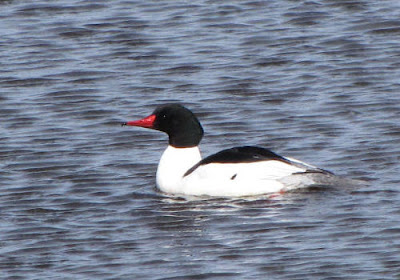 This is the best picture I got. This is the male common merganser. Yes, this stunning guy goes with the lady with the brown crest. He can raise his crest too when he wants to. There's a link below to the post where I captured one flying in to Pentwater Lake. The ones today are on Lincoln Lake, a wide place just before Lincoln River empties into Lake Michigan. 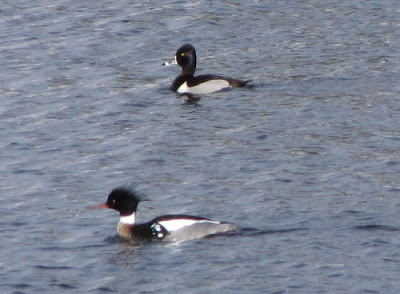 However, this is the "best" find of the day. The duck in front of that male ring-neck is a merganser that I've never seen before. At least, I didn't know it if I did. At first, I wasn't paying attention. It was swimming with the ring-necked pair and the female common merganser. But it's not a common merganser, it's a red-breasted merganser. Look how different it is- the white stripe around its neck, the brown spotted breast and that row of spots at the base of the wing. Very cool. And if it's really common... I don't care. It's new for me.

These are non-ordinary ducks.

You have so much to say about them.

Well, all this is pretty exciting to me, Joan. All I've ever seen are mallards and whatever-are-those white ducks that hang out in many places. These are something else!!

Looks to me like you had a very ducky day :) I don't think I've ever spotted any of those kinds of ducks. I do enjoy watching them though

There are so many kinds of ducks, and I can only identify mallard..They are very interesting to see.

I am another that likes to watch the birds and fowl but unless it is really different rarely notice them, I sometimes wish I could name more.

you probably seen more species of ducks at one location on a single day than I will all season. I probably should go somewhere the ducks are more used to people, I'm definitely considered a 'threat' in the places I go and they take flight as soon as I'm spotted.

even when I have my camera braced against a tree, full zoom never captures a print quality photo :(

I'm also trying to improve my bird watching, in preparation for a trip to Montezuma Natl Wildlife Refuge this summer. The only waterfowl I can with confidence name are mallards, geese, swan, and the loon. Lol

I haven't seen such lovely ducks around here, but we have had some cool birds lately. We bought some high quality food with a lot of nuts in it and it brought the nuthatches back to the yard. It's great to see the feeder loaded with happy birds. :)

Ducks are some of my FAVORITE photography subjects. I am just smitten with them. I went to Florida and captured some wood ducks. Oh. MY!

oh, i am very innocent in naming them, i can name a few but I may not even get them correct even they are but a few that I thought I know :(

rainfield- I learned so much! I think I'll remember the ring-necks for real, now, and that red-breasted merganser was just awesome!

Carmen- well, stick around, gal! because I hope to show you even more ducks this spring!

Ann- it will soon be waterfowl migration time here. If I would really get on the birdwatching bandwagon, we could do non-stop ducks.

Icy- well, I'm embarrassed to tell you how recently that would have been true of me. I'm trying to improve that.

Carol- I'm surprised- you seem to know so many birds. But perhaps like me the waterfowl have come last to you.

wiseacre- if I would get organized, the mouth of the Big Sable River here is a prime location to watch during migration. But I'm still taking baby steps.

Rebecca- Montezuma is SO awesome! I grew up just south of there.

Lin- nuthatches are nifty- so glad you got them to visit you!

Joan- you should come visit! The West Michigan Birding Festival is here in May.

A nice variety!
We spend a lot of time with our birding, as Princess Gail documents on her blog. Waterfowl used to be uninteresting to me, but lately I have opened my eyes to their rhythms and beauty.
Thanks for your nice post!

Cool seeing all the mergansers in one spot! Congrats on the finds. I've only spotted the hooded merganser on the creeks around me.

Ferd- They really are interesting, but until lately they've been quite a mystery to me.

Casey- I've seen the hooded in Ohio... maybe they'll be here this spring.