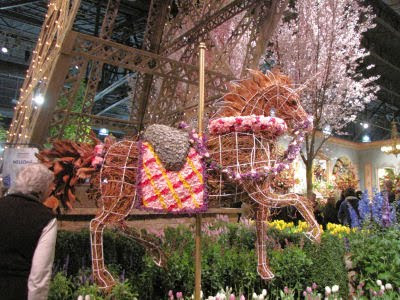 A major component throughout the Philadelphia Flower Show this year was carousel animals. The Springtime in Paris theme focused on the turn of the 20th Century. Think of the huge, fancy carousels with many different animals, not just horses. The unicorn was right under the Eiffel Tower. 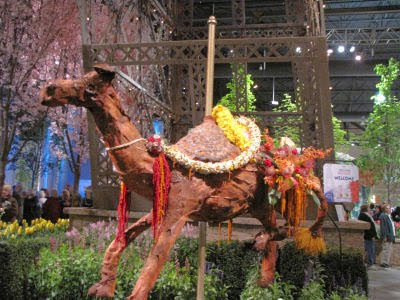 The camel was definitely one of my favorites! It had a lot of personality, in addition to being a funny animal. I hope I got pictures of all these displays, as they were scattered throughout the show. 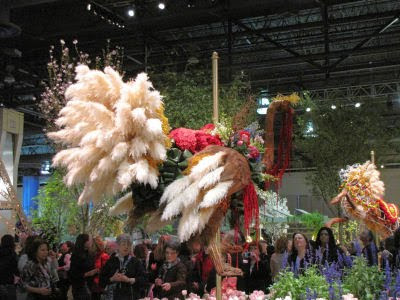 I didn't get as good a picture of this one. The white tail of the ostrich hogged all the light, but if you look carefully you'll see its neck and head stretching into the distance. 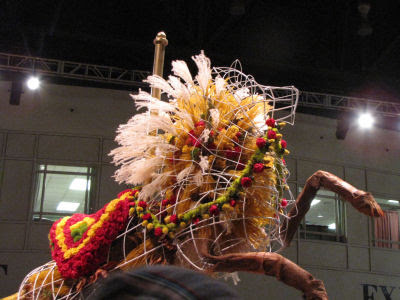 The lion was my least favorite, just because the wire frame wasn't filled in at the nose. I thought it was difficult to imagine the rest of the animal, since all the others were so realistic. But I like the mane. I like this lion better than the one from last year's show. See Philadelphia Flower Show 2010- Animals

There are more carousel animals that I found, but I will spread the pictures out, so there isn't photo overload on any one post.

I sure hope you are prepared for FLOWERS, and PLANTS! Get ready for a ride on the Paris Carousel!

Those are cool!! How nice to see a color other than white, eh? I'm envious.

I think I've been able to follow three of your trips to the flower shows now. It's always fun to see what kinds of things you show. I think I like the camel and the unicorn the most this time.

wow it's very beautiful. I love that.

those are really awesome. It always amazes me what they can do with flowers

The Camel is my fave also. These critter forms are a cool sight. No wonder you enjoyed the show.

Lin- I could claim to have had color overload, but there was no overload- it was just right!

Ratty- Yes, I've been to 4 shows, but the first one wasn't nearly as good and I only took a few pictures. Plus, this blog wasn't started then.

Grace- It's just an amazing experience!

Ann- I think this year there were more actual plants and fewer displays made from plant materials.

Jean- stay tuned for live plants. I really like both kinds of displays, though.

It's good when the balance is right between live and displayed, can't remember the last time I went to a flower show. Glad you enjoyed yourself.

I love unicorns - and horses, too. I used to have a huge unicorn collection - porcelain statues, stained glass and framed prints. Before I acquired my collection of sons and had a guest bedroom, they were all in there!

Carol- Do you have some big ones over there? I've been to the Chicago one once, also Grand Rapids (not so great) and when Ann Arbor used to have one, I actually helped with setup for two years.

Carmen- Wow! You actually gave it up, or just packed it away?

I still have them, Joan, but they're slated to go. I'm hoping to sell them on Craig's list or on Jo's ( Poetic Shutterbug )new Ebay store. I've decided to keep my elephants, strawberries and mushroom but will bid farewell to the unicorns.

We have the Chelsea Flower Show in May - Queen usually goes on a preview visit, it's always the one that gets a lot of publicity. :)

We have lots of little ones all over the country. The Southport flower show is our nearest big one - not been for years.

Carmen- OK! As long as you get to keep some of your treasures. I know that sometimes choices have to be made.

Carol- oooh a flower show in another country. That would be great! I've become something of a snob (hangs head apologetically). I can handle really small local shows because of the local value. I have trouble with medium-sized shows because they try to be special and usually fail. The really big ones have enough to be able to wow me.