The carousel motif was carried through the 2011 Philadelphia Flower Show (Springtime in Paris). Late in the day, we stumbled upon the dolphin. 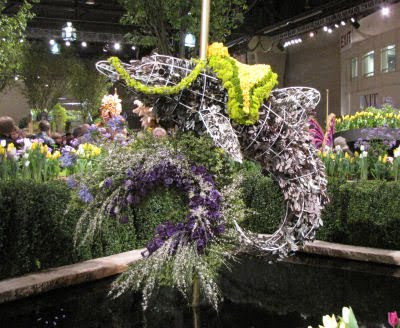 The last three animals formed the center of the stage. You can see the carousel stage in the distance under the Eiffel Tower picture at Welcome to Paris. 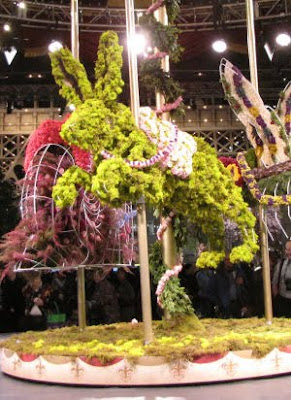 The fact that they were so close together made it more difficult to separate out the pictures, but here is the rabbit. It's startling color made it stand out clearly. 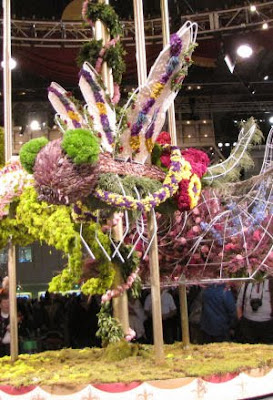 I thought the bee was confusing. It's eyes look more like a fly to me, but it has an impressive stinger, so I think it must be a bee. 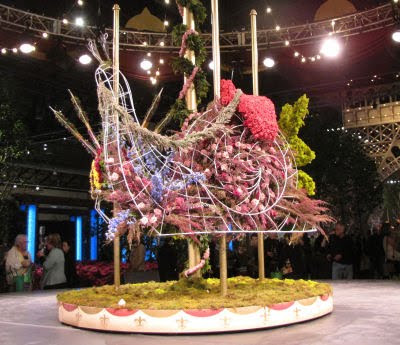 The final animal on the stage was a snail. I like it quite a lot, except I wanted the head to be filled in more.

The dancers and other performers had to deal with that very small stage! Note the can-can dancers in the post mentioned earlier.

So, now we've toured the carousel... tomorrow it will be time to see some flowers!

those are very impressive. I do agree with you on the snails head though, it somehow looks unfinished and the bee is rather confusing I don't know if I would have known what that was if you hadn't said

The rabbit really looks the best but, why not, with Easter just around the corner. I like all those cheery yellow flowers.

The rabbit is good for the Year of Rabbit.

not my type of thing,
go get lost in the woods and bring me something back I might Lichen :)

Yeah, I'd like some of those animals filled in a bit more.

What a lovely show! I saw some photos on other bloggers' posts too. Wish I could have been there.

Ann- The bee seemed out of place compared to the detail and flamboyance of most of the others.

Carmen- The color of the rabbit was so bright and clear, compared with the other two it was paired with.

sir rob- Up close the whole thing is like being immersed in another world. Heck, it's not "like" that, it is that.

rainfield- you are so right!

wiseacre- sorry. I'll be showing quite a lot of flower show stuff. Of course, you know I'll be back outside soon. Already have been, but I have to share all this COLOR!

Lin- Who else is showing Flower Show pix?

I believe that was a dragonfly on the carousel at the Flower Show 2011. :)