Who Went to Hackert Lake? 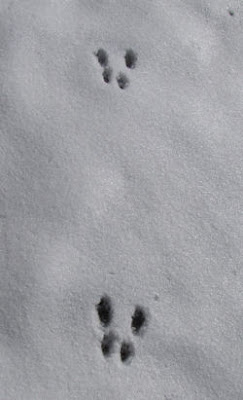 The squirrel went to Hackert Lake. Remember, the squirrel is a "hopper," with the large back feet landing in front of the front feet. I think this might have been a fox squirrel because the prints were fairly large, but there's no way to be sure. It could have been a large gray squirrel. 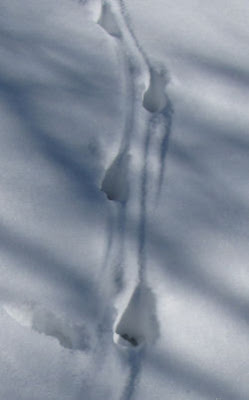 The deer went to Hackert Lake. This deer was just walking along, not even worrying about picking up her feet. I'm guessing a doe... medium-sized prints. Look deep in the lowest print and you will see the two definite hoof marks.

The fox went to Hackert Lake. Why do I think this was a fox and not just some neighborhood dog? The primary reason is that I could smell it. Foxes tend to leave a very pungent scent trail and if you are there on the same day as they were it's very distinctive. Also, notice how the tracks are very much in a straight line, with each foot placed almost straight ahead of the last one? That's more typical of a wild canine rather than a domestic dog. 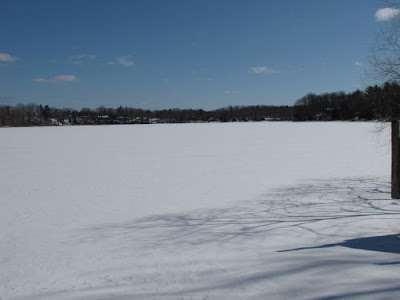 Maggie and I went to Hackert Lake. I'm guessing that you figured that out! This is a small lake only about four miles from my house. We drove over there and were pleased to discover that although the road wasn't plowed it had been driven enough that I could get through. There is a tiny park and a boat launch site.

Then, we walked down Quarterline Road the other way until it dead-ends. I'd never walked to the end of it. Actually, I still haven't because there was deep snow at the south end, and the road continued for at least another quarter mile. So, I'm assured of an adventure for another day. (Just in case you thought I might run out!)

So, we saw nothing new or exciting, but we had a lovely walk in the bright sunshine!

Just like a nursery rhyme. We all went down to Hackert Lake. Lovely.

The prints were so incredibly clear..not that I could identify a one. I wonder if all the critters met up for a shindig!

And finally everyone meet over there.

Well Hackert Lake was a very busy place wasn't it? :) Sounds like it was the in spot to be.

OT: I was expecting to jump one and this could be the reason why it was so late already that there's no dog barking at the top. LOL

...and the Shark called the meeting to order when all the animals convened at Hackert Lake!

It does sound like a nursery rhyme!
I'm curious about that fox smell...

Emma- you sure set the theme for this one!

Carmen & rainfield- nope, they didn't ever meet up... just went their own ways

rob- yes, I'm skipping one contest... trying to think up something that people will actually enter, and will give lots more time.

vanilla- the shark is a fearless leader who knows Robert's Rules of Order (more or less)!