After I posted the pictures from the summer of 1949, a friend got back to me that same night with an obituary for my nephew, Frederic S. Leary, Ricky. Well, that was fairly astonishing since I'd been trying to locate him on line for several years, with no luck. I don't think I'm an ineffective researcher... anyway. It was real, and Ricky is gone too soon, from cancer.

However, as a result of that obit, I was able to find my nieces, his two sisters, Jo-Anne and Susanne. We've re-connected, and although we hardly know each other, it's pretty exciting.

So, I went hunting for any pictures I might have of them. How about the summer of 1956? It could be 1957, but I'm wearing glasses, so the choice of years is limited. This is me on the left, Ricky center, and Jo-Anne on the right. It's taken at their house in Massachusetts. 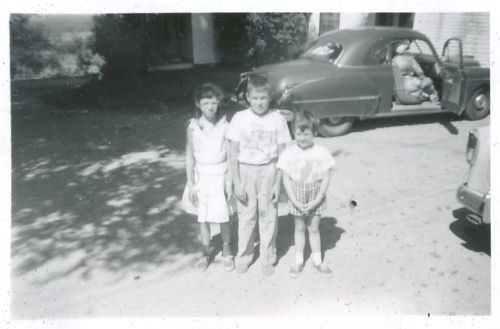 Here's their family. This one's fuzzier, but it's what I have. Jo-Anne left, Ethel next, Brother John (that's what I always called him), and Ricky on the right. 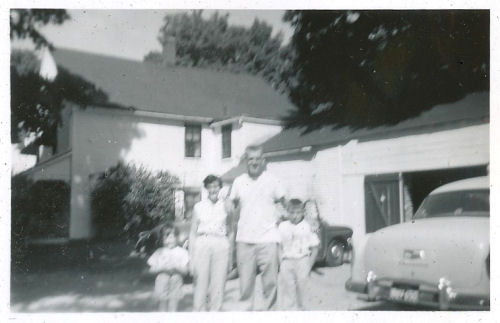 I have one more picture of us, but poor Susanne gets left out again (she wasn't born yet in the first set). Well, most of her is left out, anyway. Their family came to spend Thanksgiving with us, and I think it was in 1963, although it might have been 1964. Interestingly enough, there's my buddy Marie in the back as well. (It's a real mystery how she got permission to visit me on a holiday!) This picture is in the house I grew up in, the one my dad's father built.

From left to right: Jo-Anne, Ricky, John, Marie (standing), my mom and dad (who is grandfather to John's children), Ethel, and part of Susanne. Oh, how I wish I had taken more pictures. We were so conscious of how much the film and developing cost. 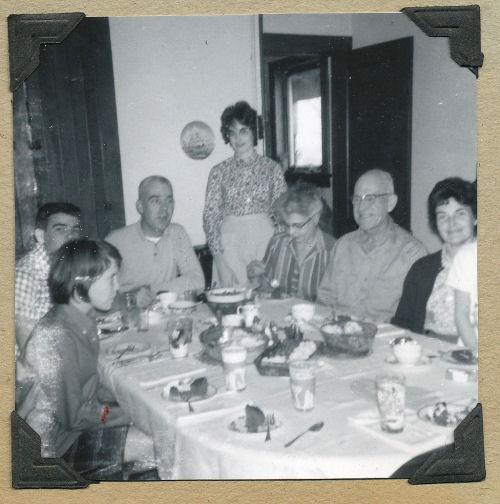 And that's the last time I saw any of their family except John. I'm looking forward to getting to know the girls. I really can't say, "again," since I barely knew them back then. Ricky and I were closer in age, and were better friends, just because age makes such a big difference when you are children. Now the few years between us hardly matters.

Maybe some day there will be a current picture of those of us who remain.

In other news: I wrote in the morning, and worked on a web site all afternoon. I'm ready to get my face out of the computer.

Tres cool. Cost conscious; yes, sometimes a 20-exposure roll would last so long we'd forget what was on the front by the time we took it in to be developed.

Sad that your nephew passed away but nice that you have the opportunity to reconnect with other relatives.
I can't tell you how many rolls of film sat forever before going to get developed because of the cost. I was thrilled when digital came along