I spent the day primarily trying to temporarily jury rig a couple of issues with the door that can't be properly fixed until the door is re-hung. And I'm not tackling THAT in the next two weeks.

I have no picture for the first one. I thought I took one, but I guess not. I'll try to explain. Because the door is crooked, the latch in the door does not catch on the fiberglass door edge which serves as the striker plate when things are correct. To compensate for this I had taped a cut-out piece of a tin can along the edge to make it a little wider. With the edge gasket slipped over it, this worked OK. It allowed me to latch and lock the trailer. If someone broke in, they wouldn't have had to work very hard, but the key word there is "broke." They couldn't have simply opened the door. Important to the insurance company.

Anyway, with the rest of what I'm going to show you today, that was not adequate, because there was too much pressure on that thin piece of taped metal. So I sloppily fiberglassed it to the edge of the door to make it more rigid. Ugly. Functional. You probably don't need a picture.

Then I got serious about building a temporary gasket for the door. Yesterday, I accidentally discovered that the butyl putty tape sticks really well to the pool noodle foam. Need I say more? Pool noodles are a buck at the dollar store! The butyl tape is more expensive, but I only used a little bit by csplitting it lengthwise, and the results are well worth it.

So, I shut the trailer door, cut strips of pool noodle and stuffed them in the cracks. That's not blue sky you are seeing along the top edge of the door. It's pool noodle. Just happens to be the same color. 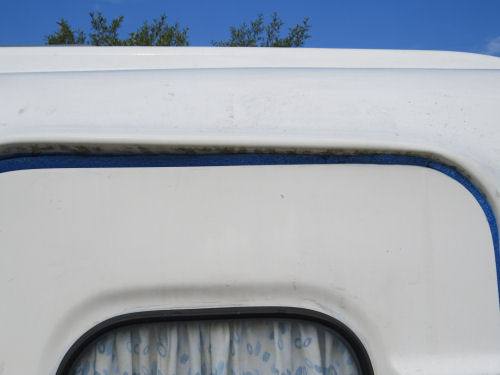 The I hosed the door down. See, I fudged a little when I said all the leaks were fixed. I wouldn't call the door-water issue an actual leak. It's that fitting problem that I've known about since day 1. But in truth, when it rains, the water simply runs in a river down the inside of the door. When the door is closed. Not so great. Maybe not so bad if it all continued to just run to the outside, but it doesn't. See Water Woes.

By experimenting, I found that most of the upright edges of the door don't need a lot of thickness of "gasket." Aha! I have the solution to that, with this product that I bought thinking I wanted it for the windows, but it didn't work for those. 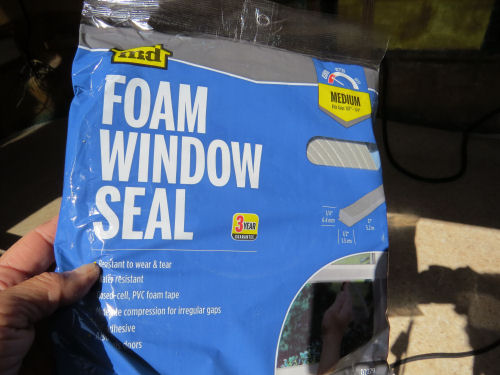 The edges of the door were a mess because of previous owners also trying to stop the leaks, with multiple layers of gunk. 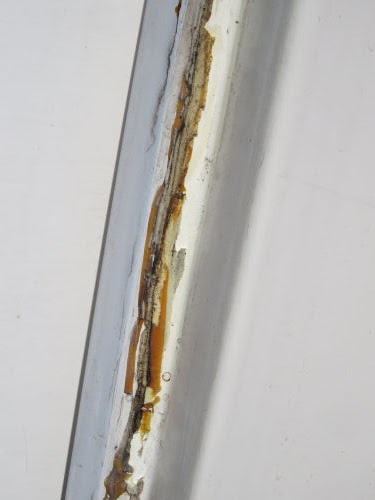 Imagine my surprise when I learned that this scraped off quite easily. I got one strip of the foam on when I discovered that not only was it getting very hot very early in the day, but the work-killer was that apparently my Bingo card of the week included a square for little-biting-flies-with-golden-wings-and-razor-blades-mouth-parts. 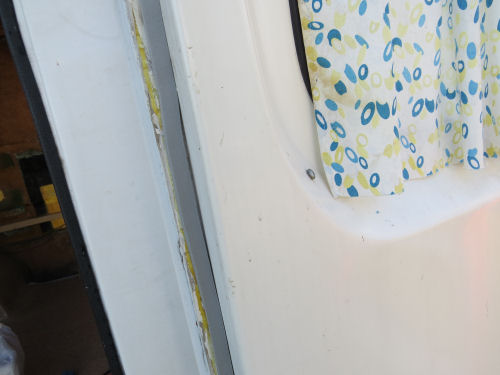 No. I'm not under that much pressure. I ate and went shopping. More on that later.

Later, early evening, it cooled a tiny bit and the flies found someone else to torment. I stuck my cheapo gaskets on, closed the door and watered it down again. Vast improvement! The only place that leaked was that gap at the bottom. 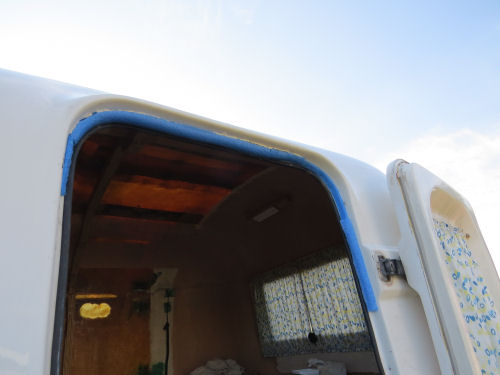 There is still that huge gap at the bottom of the door. Maybe I'll just cut a piece of the pool noodle that fits there, and if it rains, we'll jam it in the crack. 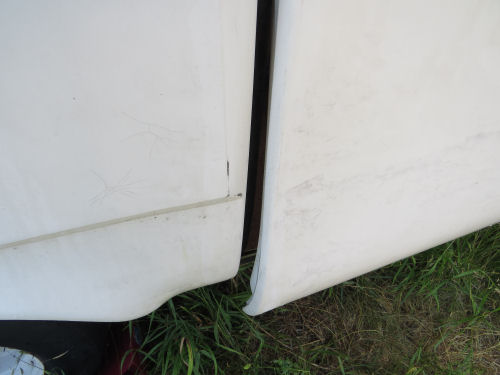 There are actual gaskets made for these doors, but the gap needs to be much more uniform in width. This should work for now.

The shopping. Well, I had to do some ordinary errands, and finished with groceries. In between, I started buying some odds and ends I need to do the bunks correctly, and some things for the wiring inside the trailer. I can finish part of the right side without needing to do wiring, but not the left. It's not clear how far I'll get with all this, but I need some pieces of the puzzle to continue. Of course, I couldn't get one thing I wanted. Went to 4 stores, came home and ordered it. It's supposed to arrive in a week. That will work. Let's hope it's fast. And it's absolutely a given that I don't have everything I need. For one thing, I didn't buy the new wire for the trailer lights. That all has to be redone, but I need to measure how much, and research what gauge (what's in there isn't all the same- just toggled together, of course).

And that is all the news for today. Too hot, too humid.

Those pool noodles are useful for so many things other than fun in the pool. Sounds like you've got a good handle on the door leak for now.

Thanks for sharing this wonderful post with us. Hopefully this worked out for you on your door and there were no problems afterward. Have a great rest of your day and hope you are doing well.
Greg Prosmushkin