I still did not manage to complete either project 1 or 2 on the trailer as listed a couple of days ago. So have a lovely yellow spider.

This is a crab spider, possibly in the genus Xysticus. It's probably a female, since it was just under a half inch long if you include the legs. Males are smaller. An unusual thing about crab spiders is that they do not spin webs. They hunt on the ground or in trees. They lie in wait and ambush various smaller critters that happen by. Coloration apparently varies. Bugguide was not willing to ID beyond the genus, and Wikipedia says you have to microscopically examine them to determine species. 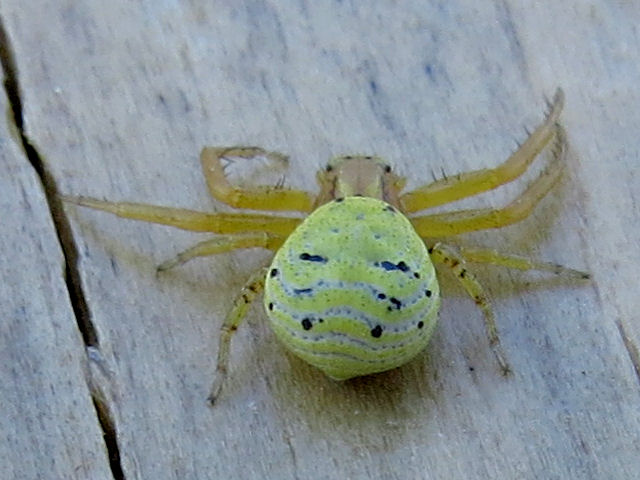 But it's good looking. I have no idea why it decided to visit one of my wall surfaces. Thankfully, not at one of the still-sticky stages. 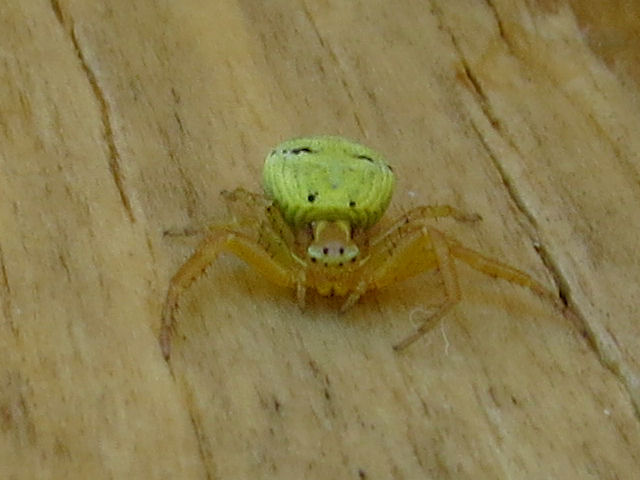 I am moving more and more slowly with each passing day as the temperature rises. In the afternoon the air was so hot that it hurts to breathe when I'm outside.

Nevertheless, I made enough progress that I think I can show you something on the trailer tomorrow. I tried to think ahead and do a couple of things that don't depend on finishing the part I'm working on right now. I believe I have really fixed one of the water leaks, and identified the mystery one that I found yesterday. I popped 10 autumn olive out of the yard. I trimmed a tree in front and watered the flower beds. This sounds like a lot, but it was done in very small spurts with a lot of sitting and cold drinks in between. It's 92 in the house, but feels sort of OK with the fan on me.

Posted by Sharkbytes at 7:08 PM

I have never seen anything like that before. It's rather fascinating looking
It's been really hot here but thankfully with the help of a fan running in the house it's been bearable.