Today was non-stop. I reassembled the kitchen, took the trailer for a test drive, got the tires checked (they swapped the spare for one that was cracking, but I don't need new ones), cleaned the inside, and started getting it ready and packed to go.

But what I'm going to tell you about is the last of the ISSUES that had to be addressed before it went on the road again. That is the problem with the window bracket rollers. The little flimsy arms that push the window out and close it again when you turn the crank are supposed to have a roller at the end of them that fits in a channel. But the factory installed ones had disintegrated and the part is not designed to be able to replace them after the fact. If you look closely at this picture, you can actually see that the left roller is not in the channel, but is sitting on top of it. 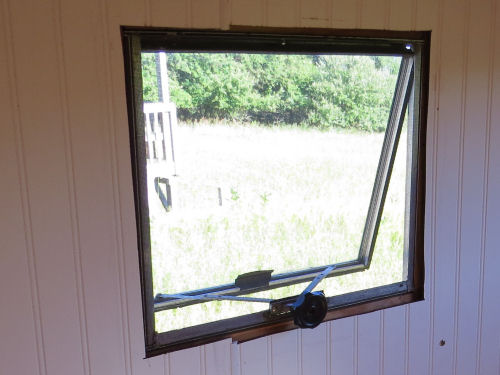 So, what is the big deal, you ask? The bars will still push the window out, and when you want to close it, jut roll the bars in and go outside and push the window shut. Yes, yes, you can do that. However, then there is nothing holding the window tight into the frame and they just flap on their hinges- their hinges that slide apart. I can just see me driving down the road when the wind is right and the window just taking off on a trip of its own. Not to mention having them flap in a rain storm with wind.

The O rings I had thought were going to work were a perfect size. However, the rubber had too much drag against the channel and they kept bending the arms and popping out. Those were try #2 (#1 was wire gaskets). You can read about the initial problem

Try #3 was nylon washers. I bought the thickness that I thought would fit the channel. Thought I could split them and super glue back around the "hub" at the end of the arm. I could split them, but the ones I bought were too small.

Try #4 happened because of the pegboard project. While I was sorting a bunch of old stuff that was mixed in with the pegboard hooks and other tools, I found a piece of neoprene gasket material. "Hmmm," I thought.

I drilled a 1/4 inch hole in the sheet, the size needed to go on the hub. 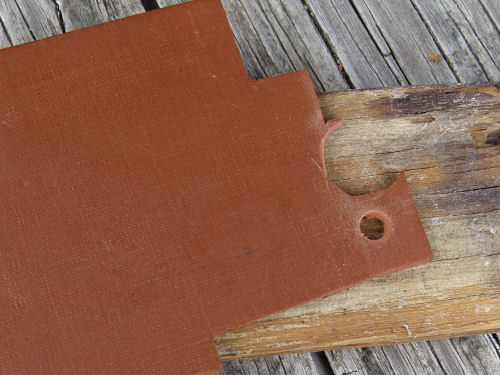 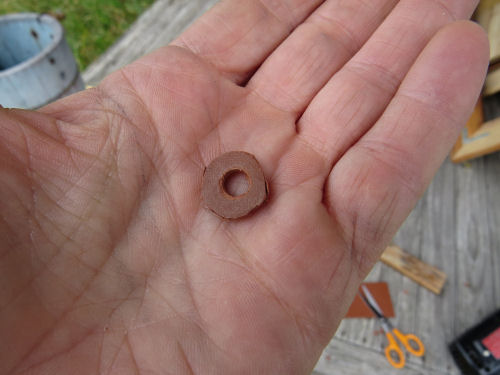 The problem was that this particular piece was at least 35 years old. It was also brittle, and if you look in the channel you'll see that one of the two I made promptly broke. 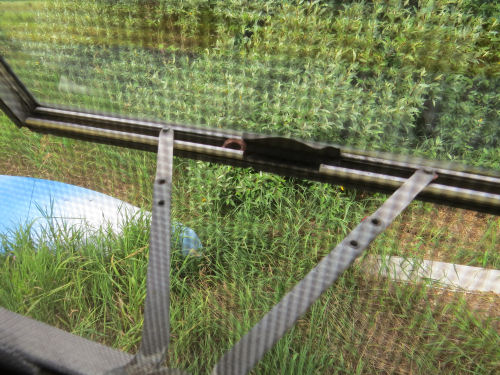 No problem! Buy a new sheet of it, right? Well, not at Lowe's. I did look up to see if you can still get little sheets of this, and you can. Some Lowe's even carry it. Not mine. And not only that, the two guys I asked about it didn't even know what it was. The second one was funny. He kept asking me what it was made of, and I kept saying "neoprene- it's a rubber product." He apparently had never heard of it. He suggested sheet metal and then plexiglass. Um, no. Probably need to check an auto parts store, but I'd had enough store fun.

So I went looking in the nylon washer bin again. Found two sizes that looked promising. These are 92 cents a pack. So I got one pack of each.

Try # 5. These ones are the right size. They are flexible enough to get on the hub, although the holes are a little big. However, you can not then force them into the channel. It would be great if the windows were made so that you could slide stuff into one end of the channel, but they aren't. 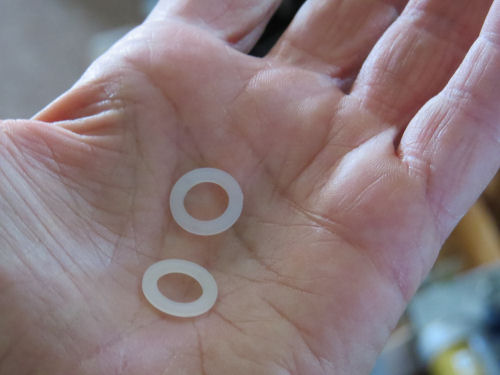 Try #6. I had one more shot at this without another store run. The other washers were the same size, but they were thinner. They were exactly right for the channel. They are flexible enough to get on the hub and into the channel. However, they are so flexible that they popped right off the hub. But we are getting close! So I backed them with a piece of duct tape. 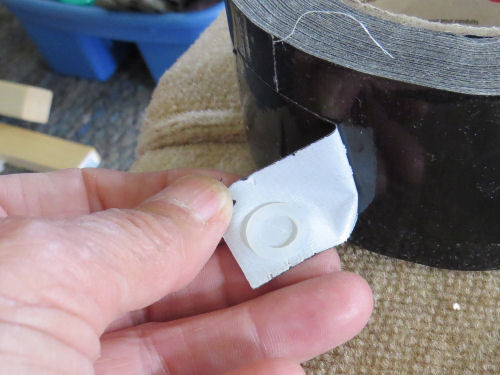 Cut it to fit and popped a hole in the middle. 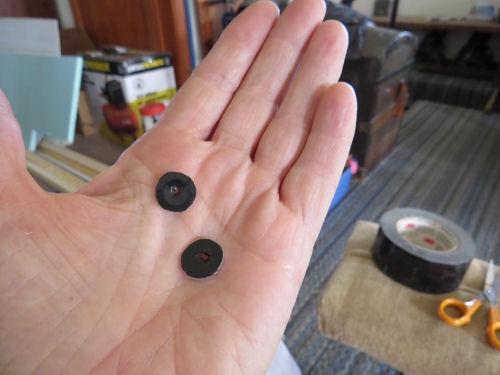 They work! So I have two of the windows fixed, and I'll get one more pack of that size for the other two windows (and maybe a spare). The arms do not pop out of the channels when I close the windows. We'll see how well this lasts. Even if they wear out in a year, I can probably afford $1.84 to replace them.

I'll show you what the inside looks like when I'm close to ready to roll. I'm thinking Thursday morning. It's pretty exciting. Even the guys at the tire place loved my little Sunny. They both said "You're doing a really nice job." That feels awesome, because there isn't any way to make it look factory good again, but I think it's coming along.

You're really living by the old saying "If at first you don't succeed, try try again" Glad you were able to find a workable solution. It's always a plus when it's an inexpensive one too.