Now I am actually making forward progress. That means that I'm doing something that isn't just a temporary functional fix so that the trailer is usable, but I'm adding things that are the way they are intended to be in the final makeover.

Well, it still doesn't look like much, but one bench front has its new covering. And you can see that one of the completed walls is put back in. Well, almost complete- I haven't even ordered the edge trim yet. That can be done much later. 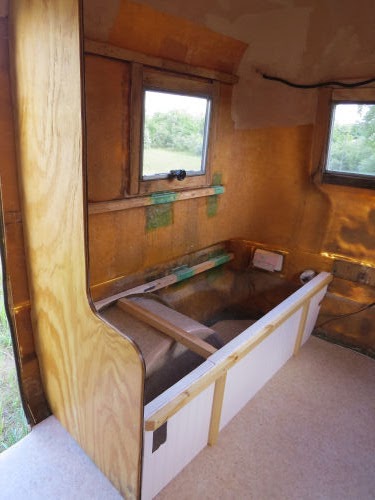 Many, many steps to get here. I had already added to the original frames to make them work for my extended bench lengths, but the old paneling was still on the fronts. It turned out that was glued, and it splintered like crazy when I pried it off. Remember this kind of paneling that turns into tiny weapons the minute it's cracked? That stuff. 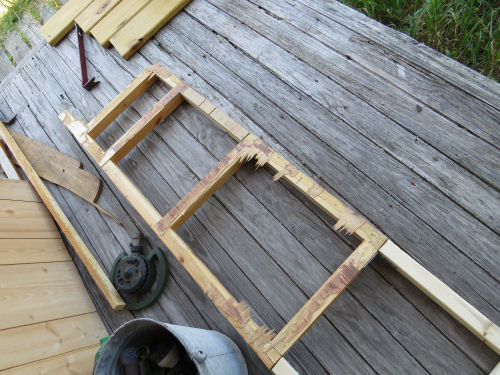 I wasn't sure about getting those off easily, but my oscillating saw came to the rescue once again. And then a little sanding made the frames good enough. 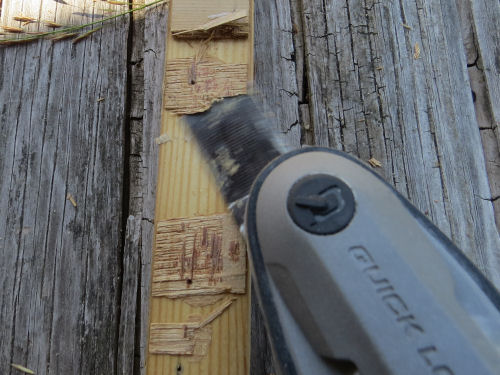 I cut the pieces of the masonite beadboard to fit. You need to tape the finished surface of this stuff before you cut it or it will tear. Then you can just use a fine blade on the sabre saw. 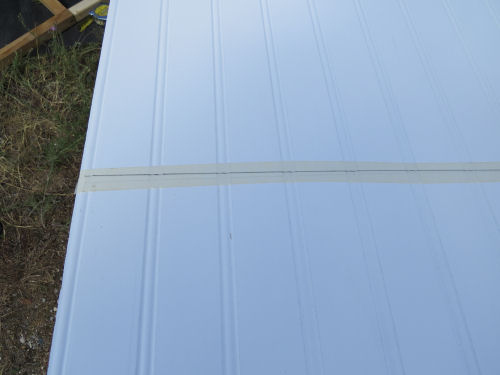 Although I'm not going to get the actual wiring done before this trip, I'm planning ahead to where I want an outlet box. After I did the cutout, I just removed the box. We'll run an extension cord under the bench for now. That will be better than last year when extension cords had to be just draped over things. 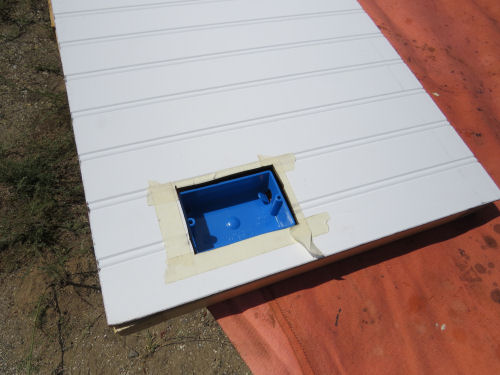 The liquid nails is a perfect product for attaching the paneling to this frame. It just didn't stick to fiberglass well. 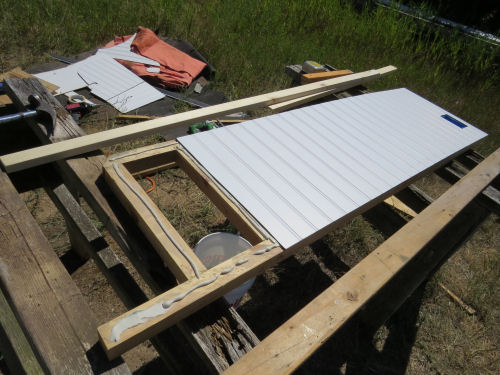 Added the second piece and clamped it to dry. 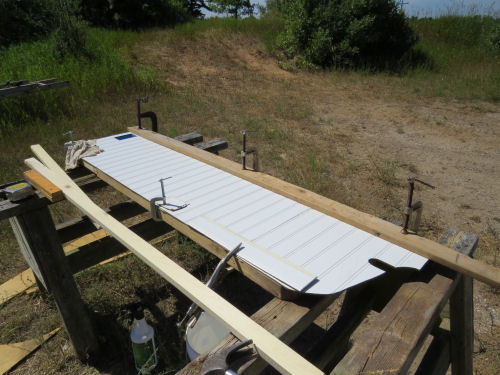 Here is where I added the extra step. The beadboard already has a white finish. However, I had noticed that it gets marked up practically every time something touches it. The label on the back explains why. This is not considered to be a finish, but more of a primer coat. I decided I had to get a better finish on it. So I went and bought paint.

Here's my next public service announcement. I bought the good stuff. I got Sherwin-Williams Extreme All Weather Protection Exterior Enamel. I bought a new brush, and not an el cheapo. I put on two coats. But I'm not very happy with the results. You can see every single brush stroke. But it's supposed to wear really well.

Meanwhile, I had cut and polyurethaned new trim boards for the front of the bench. These are more than just for looks. They hold the middle board (that doubles as the table) when you want to use that end of the trailer as a bed. So this has to be placed just right. I did make one little error, but I'm hoping it won't be a problem.

Eventually, this evening, I fastened the trim boards across the front, and put the whole thing in the trailer. Lookin' good! 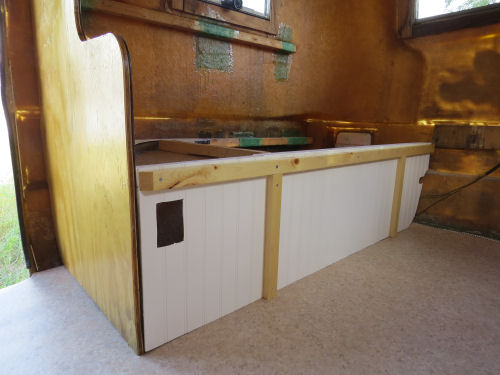 We had lovely rain in the night last night, and more this morning. Quite a bit. The vent is leaking somewhere, so I'll definitely put the last of that auto sealant around it. But the door was nearly water-tight!

I also worked on some interior stuff for the trailer that I'm not ready to show you yet. Tomorrow I have to make a decision about something to do with the table. I have not yet put any holes through the vinyl on the floor. But it has to happen soon, and I want to be sure they are not holes that I'm going to regret.

In other news: I walked to the nearest auto parts place to get oil for the car. It was quite low. That's not good.

Posted by Sharkbytes at 8:18 PM

The trailer is coming right along. I like the look of that beadboard