I guess the biggest news is that the store across the road is open. It's an Amish store called West Shore Market. They have been open about a half mile away for a number of years, but this is a brand new building, clean, beautiful and with very nice goods. Lots of bulk items. Their deli looks like it has nice stuff. They've always had good cheese, and now they are adding meats. 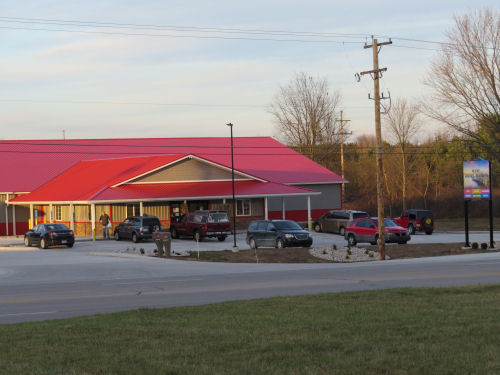 They opened yesterday. The parking lot has had cars in and out steadily. I went over today to check it out. I will be able to do some shopping there, but even with their expanded space they aren't doing a real produce section. They have squash and potatoes and things that keep really well. But I buy a lot of fresh veggies and salad stuff, so I'm pretty disappointed about that. But I'll try to support them when I can.

The grand opening is Saturday. I'll probably go over and see what specials they have.

In other news: It's pretty much all other news. I worked at a lot of projects- some editing I'm doing for other people, some cleaning up of the messes I made yesterday. I got some of the cement work done in the well pit, but the critical hole is not covered yet, so it's not worth showing you. Best accomplishment is that I'm up to 6581 words in Dead Mule Swamp Singer and managed to rework a section I thought was boring. Tomorrow, I'll be out and about.

This looks like a good size store. There are a few Amish stores around here. The closest one is rather small but it's always busy. I like their bulk section.

Ann- If one can judge by all the cars going in and out of the parking, they should do very well. It's an established business, but their previous space wasn't even half the size of this.