Might as well pick another super easy seed to look at. This invasive plant is everywhere in our sandy soil. Spotted knapweed, Centaurea stoebe (formerly C. maculosa), has some beautiful relatives. This Centaurea isn't beautiful. Here's the summer view. Maybe you like the color, but the flowers are straggly and far apart on spindly stalks. It lends a purple cast to a field of grass, but that's about it. 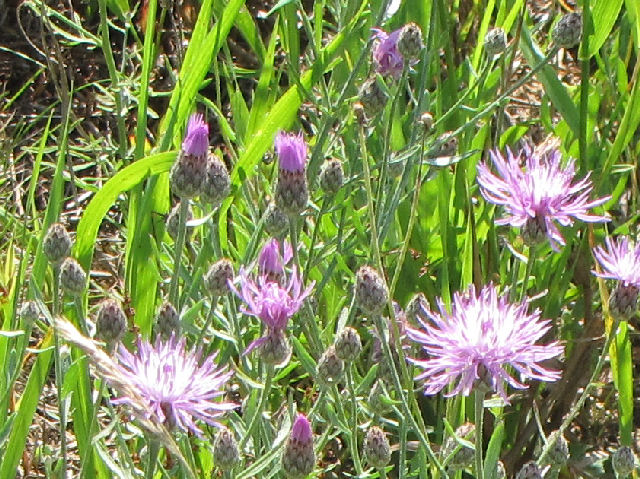 All the Centaurea look something like this with a vase-like ovary beneath the petals. I've seen some beautiful species in New York. I've tried to grow one of the garden varieties with large blue flowers. But, all I get is spotted knapweed. It's such a weed because it's so very successful. And it produces chemicals which tend to prevent other plants from growing (allelopathic).

The common name of spotted knapweed comes from the dark tips on the sepals. See the bargello-type pattern on the structure below the petals? The whole flower looks somewhat like a thistle, but it is not prickly and doesn't have spines. 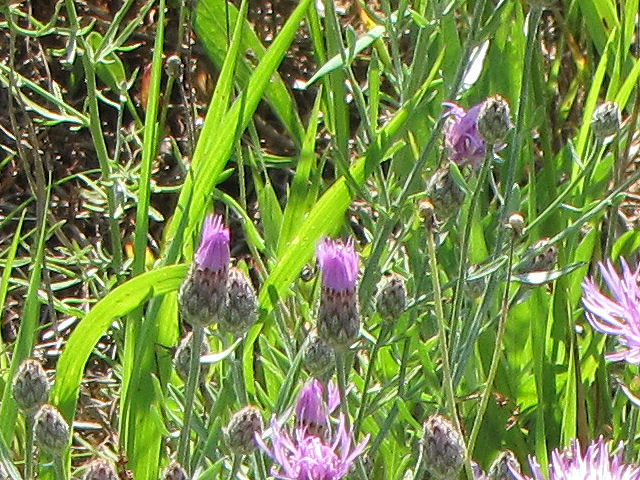 Right now, my yard is covered with the dried stalks. I have no trouble identifying the seed pods of this plant! 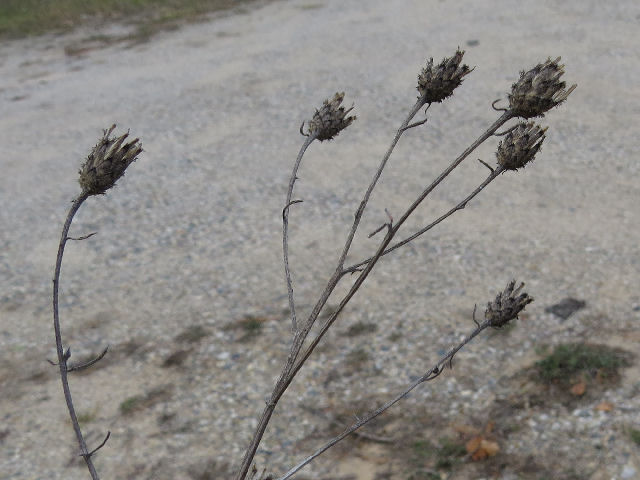 Each head looks like a little vase with curly petals. Those are the sepals with the spots in the earlier picture. So what's inside? I had never looked before. New stuff to see! 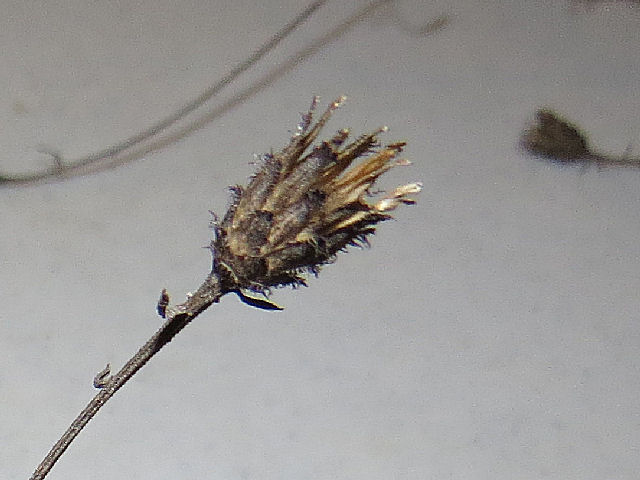 In this case... nothing. The first one I looked at under the microscope showed only a smooth deep cup inside that is empty. 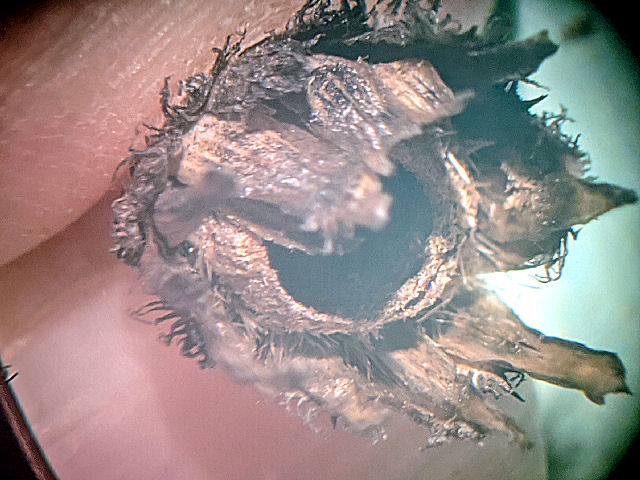 This is more like it! All kinds of hairy-ness going on in this one. 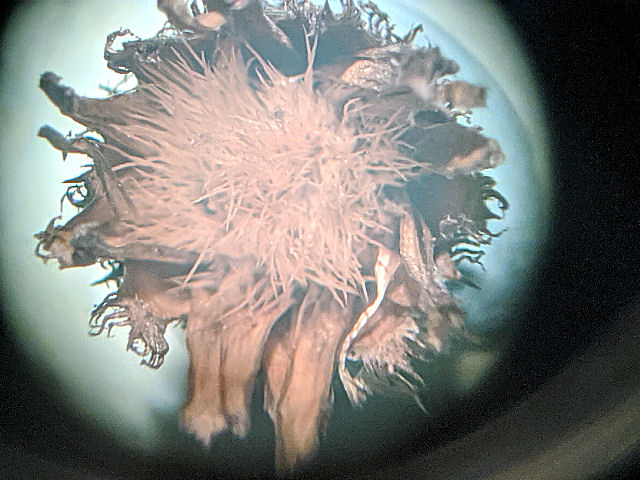 I teased the hairs out, and attached to little groups of them are the seeds. Each one is about 5mm long with the seed and the hairs (called the pappus). 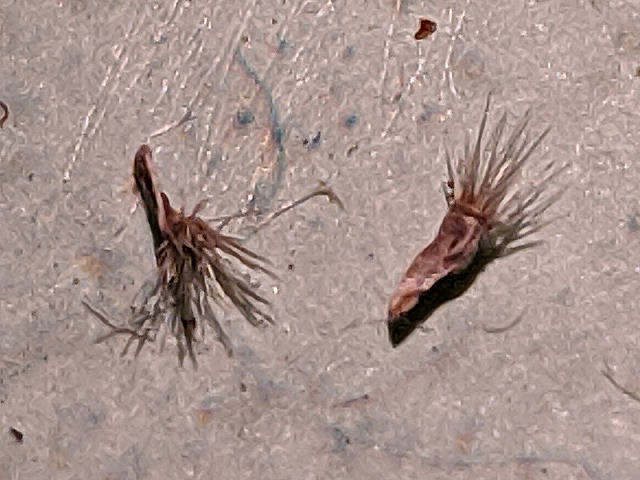 The pappus allows the wind to catch the seeds when they are released from the case. Plenty of them succeed in growing. The plant is a biennial with a long taproot. If the ground is soft, you can usually pull the whole thing out. But it's just as likely to break off and then it will just re-grow. 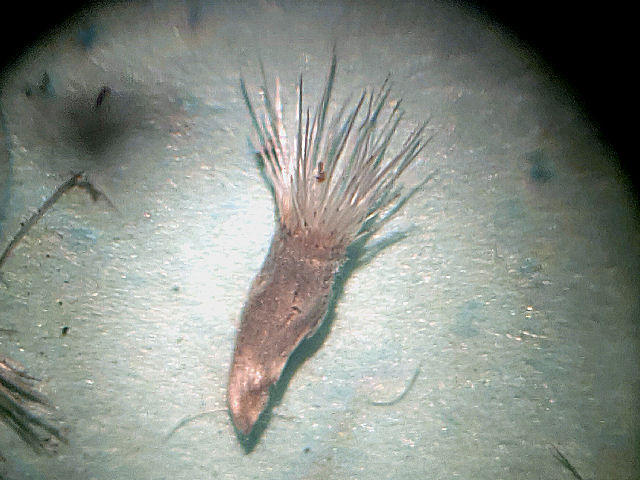 This plant is right up there with autumn olive on my hated plants list. But it's too pervasive to really get rid of. Even most livestock won't eat it. Talk about low. I've read that sheep will eat it... if they are penned up with it and have no other choice.

In other news: The weather was nasty- bitter cold, strong winds and occasional snow. Nothing that will stick around here yet. So I stayed inside and made up sentences. I actually have 2147 words written in Dead Mule Swamp Singer. But I'm feeling some internal pressure to goof off. I need a good book to escape into. I'm beginning to feel put out that the library isn't open yet. You can order books and they will bring them to the curb for pickup, but no freebie pile to trade from, and no browsing the shelves.

Posted by Sharkbytes at 7:14 PM

I thought maybe I had seen this around here but it could be I"m only thinking of thistle. It definitely isn't very attractive when it's all dried out.
The wind here was really bad last night and we have a layer of snow covering the grass this morning.

Yes, one of those hated plants - but neat seeds!

Ann- I'm pretty sure you have it. It's everywhere. PS- got your envelope, and you have guessed exactly right! Don't want to put it here.

Stu- I'm thinking that this seed project is going to be really interesting.