Some years, on November 11, I post about the fact that it is my Mom's birthday. This year has to be one of those. She would be 111 years old today. That's a lot of ones.

I thought I'd hunt up a picture of her that you haven't seen before. In fact, I found a rather unusual one. There aren't many pictures of her father (Howard Meade Rowe), particularly not with his children. As far as I know, he was a fine father, but I think most pictures of that era were more likely of children with their mothers.

At any rate, this is taken on a beach (on an apparently cold day) in New Jersey in- are you ready for this?- 1911. Lots of elevens floating around here. 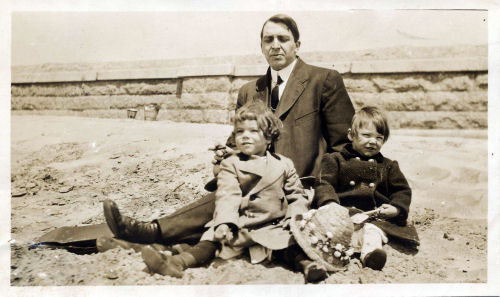 The child on the left is not me slipped through a time warp, although I'm a doppelganger for Jacques (Merrill). Mom, Catherine, is on the right. It was a little weird looking through that album. Jacques was first born, and there are lots of pictures of him. I kept seeing myself, only in the wrong era. We really do look alike.

At any rate, this is a nice picture to honor Mom. She always said she got along better with Howard, her father, than with her mother. He was dead before I was born, so I never knew him.

In other news: I was going to goof off today, but I did some stuff anyway. I wrote 577 words. Omer and I went out to take advantage of his free veteran's meal. Then I had to deal with some of the mess generated by my trying to find something yesterday. The mice have been into yet another pile of things I cared about, so that had to be cleaned up. I bought a plastic box to hold what's left. Now I've discovered the box is broken, so that has to be returned. The errands never end. Anyway, I've been sorting through quite a bit of nostalgic stuff. Perhaps you'll see some of it in days to come.

There was another blog I read that posted about all the number 11's that show up in her life.

That's a cool photo. Nice to have that history to look back on. I wish the mice would respect that. :(

After Joe's parents died last year, we went through so many photos...and I put all of them in albums so that my kids wouldn't have to after we died. I was thankful I did all of our family photos as they were growing up so the job wasn't too monumental.

Hi Ann- probably one of those that says that you'll find whatever you look for.

Lin- Our family photos are pretty good. It really helped our Josh with his memory issues so I kept it up until he was grown. Some of the older albums are well-labeled. Sadly, like everyone else in the world, I do have a lot of pictures that I don't know who the people are.