This is a picture from the other day. It goes in my series of incongruous roadside finds. It can't compete with "Paper Bag with Fish," but it's not bad.

I saw something red and black-- wondered what it was. Did a double take. It's a two-color typewriter ribbon. Such an unlikely item to see on a roadside in this century and decade. They can still be ordered, however. And, it's not been used harshly- the ink isn't all beat up like you would see if it had changed direction a bunch of times. And, what is the likelihood this would have bounced out of a typewriter that was being carried in the back of someone's truck? So many questions! I think the wind must have teased it out into a long string- can you picture that streaming behind a vehicle? And then finally, the force of the whole ribbon being tugged by the wind pulled it out of the spool. 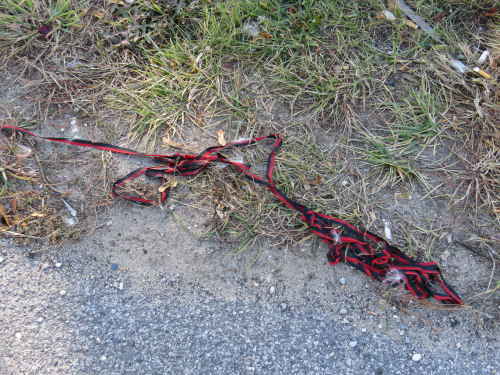 Thinking about "Paper Bag with Fish" made me notice that I've passed another Blogoversary without realizing it. I started this blog on October 28, 2008. Twelve years I've been doing this almost every day. (That perhaps makes it my longest-running habit.) Some of you have been reading it almost from the start. I've gotten to know more than a few of you blogger buddies quite well. Even met a few in real life. It's been a lot of fun. I think I'll keep it up if you can stand it!

And whether you are one of the originals, or a new reader, I want to thank you for joining me on this journey.

You are seeing the typewriter ribbon because:

1. The roof is almost done. I'll show you tomorrow when it's 100%. I had a moment of concern this afternoon when it clouded over and started to sprinkle, so I hustled up and got enough done to cover the ridge really fast. Result- I'm a little bit sore. I have to make another store run (of course) to get more sealer, so I'll do that tomorrow and finish the ridge.

2. I was going to show you the present I bought for myself, which has arrived. But it needs one little accessory to make it work. So that will also be part of my store run. You'll see it soon.

Posted by Sharkbytes at 6:40 PM

Email ThisBlogThis!Share to TwitterShare to FacebookShare to Pinterest
Labels: incongruities

My Quality Day has seniority over String Too Short to Tie by exactly one week. Congrats on a great run! And meeting bloggers in person is a special treat.
Typewriter ribbons, like good bloggers, a rare breed these days.

What an odd thing to find laying out like that. I can't remember the last time I've seen one but even then it was still in a typewriter.
Happy blogoversary. I don't know how long I've been reading but it's been a good long while.

Paper Bag with Fish came immediately to mind when I read the blog post title. I guess I have been with you that long, eh?! I still like blogs so much better than social media. The writers are more thoughtful and I like reading a story rather than just silly opinions and stuff. Glad you are still going! I will still be reading.

Vanilla, Ann, and Lin- We are all of the original crew! I'm so glad to call you my friends.