This is a really random collection of pictures taken on the way home. First of all, I took a slightly different route out of Cleveland, which took me right along Lake Erie for a couple of miles. I had to stop and take a picture. I don't actually see that Great Lake very often. There's still a lot of ice along that shoreline! 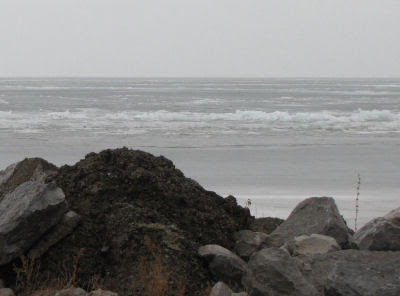 I had to do a few assignments for my job on the way. That was an efficient way to get a good start on catching up. One of the places was a cabin right on the Little South Branch of the Pere Marquette River. I drove in rain all day long, but as I got north and west of Lansing, I realized that it had been snowing most of the day in northern Michigan. It's very slushy, but makes a nice puffy white topping on the scene. 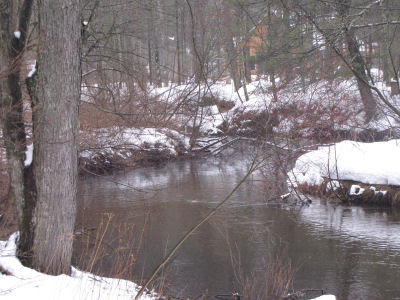 Finally, as I was leaving the cabin, I shot a wild pileated woodpecker! Of course, I only shot it with my camera, and didn't have fantastic success, but I don't care. Here's what I managed. 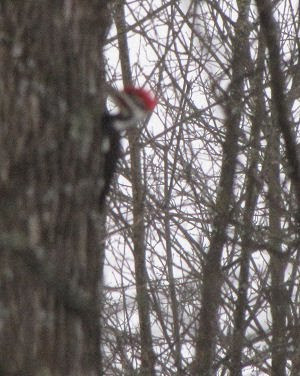 The reason I am so happy about this terrible picture, is that it's the first time I've ever managed to grab a shot of a totally wild pileated. I know, I showed you a picture before, but that was taken through a window, and the woodpecker was there because the owners of the house had been feeding it. This bird was just flying through the woods, and was surprised by me walking in to the cabin. The camera was around my neck, but even so, the birds are so quick that by the time I got the lens cover off, and turned it on, and found the bird through the viewfinder, this was all I got before it flew off. But it's a start.

Tomorrow, I'll try to start sorting the Flower Show pictures! I've been trying to get caught up reading many of your blogs tonight. Thanks for continuing to read mine!

I shall be excited too if able to shoot any wild birds, especially a lifer.

A nice end to a good trip!
Gail and I were able to grab a few pictures of a pileated woodpecker last year while I had the long lens on my good camera! A good thing because it was far away. But because of that it didn't spook. They are so big that even far away we could still make out details. It is truly a magnificent bird!

Awesome shot of the pileated. they are so rare to see and capture in the wild!

I've only seen a pileated woodpecker twice in my life, much less get a picture. Good for you, and welcome home!

I have never seen a pileated in the wild. How great that must have been!

Great series of post, Sharkey! I enjoyed reading the stories of each different day that you drove to and from Philadelphia. And, I'm glad you made it home safe and sound! JL..

Nice catch on the woodpecker. That's what usually happens to me when I see the birds.
I was reading another bloggers post yesterday. She was at the flower show also. Now I can't wait to see what pictures you brought us.

It's a little blur but I could still see woody..!! LOL

You may want to take a look at my lil boy.

rainfield- I don't seem to stand still well enough to get many bird pictures.

Ferd- are they on Gail's blog? I'll have to go look.

John- I see them fairly often in the MNF, but getting a picture is another story altogether.

vanilla- thank you! I think they don't head down your way too often.

chuck- you are a little south of their hangouts.

John- I love the journey as much as the destination, and hated to rush it, but I had to this time.

Ann- whose blog is that? I'll have to see what she says.

sir rob- yup... that bird moves so fast the camera couldn't even focus. I'm off to see the little one.

Great shots, Shark. I find it so hard to photograph birds I'm just not good at it.

Carmen- you have to stand/sit still and wait. OK under some circumstances. Doesn't work with a dog, or when you are on somebody else's clock.